LA TRINIDAD, Benguet – The Assembly of God (AOG) and the Caliking Atok Youth Group bucked tough opposition from the Wesleyan Blue Hawks and the La Trinidad, Benguet International Baptist Church (LTBIBC) in semifinal games full of runs and counters to set their face-off in the finals of the 5th season of the Laity Cup.

AOG got game-high 45 points from Patrick Shontogan and breaks from injury and foul trouble of LTBIBC’s key men to ward off a serious challenge and eke out a 101-98 victory and grab the first finals seat.

LTBIBC got balanced offensives from its men on the floor and got off to a 17-12 start. Kenwal Kyle Galian scattering five including a triple, along with a triple by Shontogan, knotted the score to 20-all but Sam Abellera’s two baskets pushed LTBIBC back up by five at the end of the quarter, 25-20.

A 19-11 AOG run initiated by Terrence Caput’s two freethrows and a triple give them the lead momentarily, 39-36 but a 15-6 counter attack LTBIBC anchored Patrick Ng’s seven points including a three point play gave them a six point halftime lead.

A compounding woe, however, started crippling in as Bernie Pangisban, who led LTBIBC in the first quarter with seven points, picked up his third foul midway through the second sending him to the bench for majority of the quarter.

The third belonged to Shontogan as he erupted for 17 markers to lead AOG in closing the gap, 76-77, after the third quarter buzzer. LTBIBC still got scattered contributions led by two triples from Edenbhert Tong, as four of them already registered double digit scoring.

The foul woes, however got worse as Pangisban got his fourth foul and Edenbhert Tong collected three of his own.

LTBIBC ignited a 15-11 run early in the fourth to get back a 92-87 lead and set-up the possible upset but Pangisban left the game off his final foul on a charge, 5:17 left in the game.

AOG then scored six straight to grab the lead, 93-92, before LTBIBC countered with two baskets to take back the lead, 96-93.

Noel Haight attacked the paint and converted a basket and got the final foul of Tong in the process, 2:42 remaining. Haight completed the opportunity to inch closer, 96-95.

Two plays later, Mark Nam was forced to sit as he accidentally stepped on a foot forcing LTBIBC to play small.

An exchange of baskets by Shontogan and Ng run up the score to 98-97, LTBIBC still up.

Nam returned but the apparent lack of rim protection allowed Shontogan to score the last points of the game with a basket and two freethrows to convert the one point deficit, to a three point win.

LTBIBC saw seven of its eight man rotation score in double digits, which is normally good enough to win a game in other days, but not against AOG today who were towed by the red-hot Shontogan. 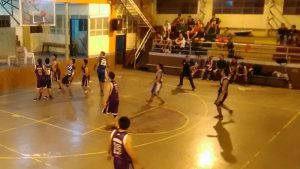 Meanwhile, Dione Pakias, Jr got his bearings back after almost being the goat by hitting two big triples to lead Caliking to a 88-83 win against Wesleyan for the second finals seat.

Caliking opened the scoring with a burst and sprint to a 31-18 lead early in the second quarter before Wesleyan countered with a 16-8 run of their own to close the gap at halftime.

Drexel Pangisban, Pakias, Domingo and Glendon Crystal starred the Kings burst with 9,7, and 6 points, respectively while the Blue Hawks came back by being consistent from the free throw line, collecting a total of eight conversions. Mohammed Jahaludeen  scored eight while Clifton Agasen connected four straight from the stripe.

The Blue Hawks then floored the throttle in the third. Overall, the Hawks outscored the Kings 23-15 in the third and took a four point lead into the fourth. Glen Natividad scored 13 during the quarter to lead the Hawks.

With Caliking was holding on to a slim 47-46 lead, 5:14 left in the third, the Blue Hawks sneaked in a 9-0 blast ignited by a freethrow from a technical foul slapped on Pakias to open a 55-47 advantage, late in the third.

Pakias, however, stepped back on the floor after cooling his heels on the bench and promptly drained a basket to stop the bleeding and got the Kings back on the go. They uncorked a 27-11 blast on collective effort and retake a four point lead, 74-68, under a minute to go in regulation.

The Hawks, however, responded with four points, two freebies by Natividad and a basket by Jahaludeen, to send the game to overtime.

Pakias canned two freethrows to open the extra period scoring before coming up with two pressure packed treys to push the Kings back on top, 86-76, time down to two minutes.

The Hawks again responded with five straight points to inch back, 86-83, but missed a couple of golden opportunities to reverse the outcome.

They commit a bad pass after stealing the ball and airballed a trey after the Kings committed a turnover by staying true to their game plan of being aggressive even if they don’t have to.

That forced the Hawks to foul and send the Kings to the line as time begin to expire on their rally.

Jerick Pakias, the second of three brothers in the Kings’ line-up this night, connected two freethrows to ice the game.