BAGUIO CITY- BCHS topped the twelve-team YMCA sponsored High School Debate competition from different high schools in the city convened last September 3-4, 2016 at the at the YMCA function hall as part of its programs and activities in celebration of its diamond jubilee. 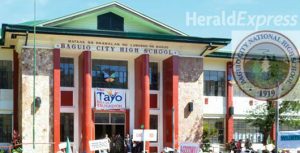 CHED provincial office to be established in Kalinga

The two day competition which was facilitated by the Saint Louis University Debate Society had four rounds of mind busting clashes among the teams to reach the coveted high grounds of the debate competition to the finals.

Mind thwarting motions were debated upon by the participating teams from the elimination rounds with themes on Pop Culture with motions like; financially incentivize Filipino indie directors to make historically accurate films, ban virtual reality games (e.q. Pokemon Go), the over glorification of villains in movies.

The Second round also focused on the theme of gender and sexism with motions on the conduct of “straight pride” parades as a response to gay pride, making LGBT counterparts of famous superheroes, or an LGBT Barbie.

The third round clashes took on medical issues as its parameter and as its theme that pointed out on the factor of Human-animal hybrid that is, adding of human stem cells to non-human primates embryos creating blends called chimeras. This brought about the teams to rebut on the motions like; Brazil should be held liable for the spread of Zika virus; banning of the development and researches of human-hybrids; and making organ donation compulsory for all brain-dead patients.

Rebuttal continued on the High grounds of the competition that took the theme on International Relations for the top four teams with the following motions; As a moderate Republican, would actively campaign for Hilary Clinton as USA’s next President, Great Britain’s exit from the European Union, The rise of Brazil, Russia, India, China, South Africa or BRICS as emerging national economies.

The grand finals of the competition started as both teams from Baguio City High School took their stand with BCHS-C taking the opposition while BCHS-A for the Government. Both teams, given the theme on Law and Justice with the final motion; “This house believes that; People who surrendered as drug pushers and/or users shouldn’t be rehabilitated, but instead be treated as criminals”.

Meanwhile, the YMCA college debate competition is also scheduled on October 1, 2016 at the YMCA Function Hall. College and University debating teams are invited, entries can be submitted at the YMCA administration office. Final submission of entries will be on September 29, 2016.

SLU-SABM got a haul in Audit Case Challenge

TABUK CITY, Kalinga - Students from various secondary and tertiary schools in the city competed today for the extemporaneous speaking...

CHED provincial office to be established in Kalinga

TABUK CITY, Kalinga – Rep. Allen Jesse C. Mangaoang is pushing for the establishment of a provincial office of the...

Outstanding Teachers Award to be institutionalized