Great 25K Footrace Up this April

BAGUIO CITY – The Baguio-Benguet Bankers’ Association signed a Memorandum of Agreement with Sports Hub Pilipinas last March 9, 2018 as a Co-Presentor of The Great 25K Footrace which is slated this coming April 8,2018 in cooperation and support by various Benguet-based running groups and individuals. The partnership aims to widen and intensify the scope of sports audience locally, strengthen the association’s active involvement in the communities of Benguet, and further the cause of the association’s noble aspirations it is known for.

Sonny Pasion, President of the Baguio-Benguet Bankers’ Association stated, “Being one of Benguet’s pioneering professional associations, we are delighted to continue the momentum of this marathon that we began in 2016. We are all the more excited to bring this event to the people that we serve in this part of the country as Sports Hub Pilipinas will spearhead the campaigns and communications that will likely increase the potentials of this sporting event.” 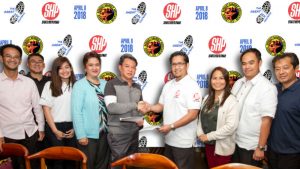 “This year’s run will have a slightly different track towards the steep uphill segment of the route, making the overall track quite of a challenge for people new to this sport as well as the experienced runners alike.” Added by Myke Espiritu, officer and focal person of the association.

Randy Rimando, President of Sports Hub Pilipinas, said, “We are witnessing a steady build-up of more and more people of all ages getting into various kinds of fitness-regimen unlike any other. Running offers a level playing field for everyone, and many are simply getting hooked into it while gaining friends at the same time.”

“We anticipate a great number of sign-ups this year as the run will also offer 3k, 5k and 10k distances for beginners to intermediate runners. Sports Hub Pilipinas will provide an extensive media coverage from today which acts as pre- promoting our sponsors, advertisers and supporters well. So, it is definitely exciting!” Adds Tim Garcia, Director of Sports Hub Pilipinas.

SSS to PH-based retiree pensioners: No need for annual confirmation

7 Ways to Maximize Your Next Convention or Trade Fair Experience