King sees himself ruling the ONE flyweight division one day

Danny “The King” Kingad, just like many others, is anxious to see what’s in store for him in the world of MMA and is raring to go for the top prize.

Although it is too early to say the young Igorot warrior is locked in for a championship bout, the just 21 year old’s unblemished professional record of 5-0, including one knockout and one submission, is a good indication that he is not kidding at all. 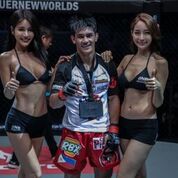 But first, this tremendous striker, with also solid grappling skills has to first hurdle his latest opponent, China’s Hexigetu, on July 29 at Surabaya, Indonesia, a fight he said be certain in the bag.

“It will be an exciting fight… If he wants to strike, then I will strike with him. I cannot say I will knock him out, but I can only say I will win this fight,” Kingad confidently stated.

Since making his professional debut in 2014, the 32-year-old native of Inner Mongolia, who has an inherent ability to strike and grapple coupled with a highly-aggressive style, accumulated a 4-2 record, with three of those wins coming by way of submission.

Kingad believes that his scheduled three-round flyweight encounter with Hexigetu could be his stepping-stone to the upper echelon of ONE Championship’s 61.2-kilogram weight class.

With ONE Championship housing high-caliber flyweights such as Akhmetov, Moraes, Geje Eustaquio, Eugene Toquero, Stefer Rahardian, Saiful Merican and Gianni Subba, Kingad asserted that his main objective in Asia’s largest MMA organization is to compete for the prestigious ONE Flyweight World Championship belt.

“My goal is to be champion,” he said. “If I win this fight and ONE Championship wants to give me a chance to fight for the title, then I will be ready to do that. If not, then I will be training harder and I will continue to do my best.”

Interestingly, the card also features Kairat “The Kazakh” Akhmetov and Adriano “Mikinho” Moraes, arguably two of the most outstanding flyweights in the world today, slugging for the undisputed ONE Flyweight World Championship title in the main event.

In anticipation of his big match-up at ONE: CONQUEST OF KINGS on 29 July, Kingad is taking the knowledge he learned from his last bout with Malaysia’s Muhammad Aiman, where he displayed a complete performance en route to a unanimous decision victory, and applying it to his training camp.

Moreover, he participates in a two-hour morning session with cardio exercise incorporated in the regime and then follows that up with a more extensive three-hour afternoon session. Meanwhile, Saturday mornings are reserved strictly for sparring.

“There’s always a right moment. Every fight is a lesson. We, as fighters, gain valuable knowledge every time we train and step into the cage,” Kingad shared.

“At the moment, my focus is to improve my skills in training. In my last fight, I learned so many lessons. In order to put a great performance on fight night, I have to invest a lot of time in training. I believe it’s paying off for me,” he added.

Kingad remains optimistic that the ONE Flyweight World Championship belt will be fastened around his waist someday.

“I am a fighter who always wishes to give you the best entertainment and the best show you will ever see inside the cage. I just want to savor each moment. That belt will be mine in God’s time,” he ended.

Achieving the Highest Norm in Toastmasters