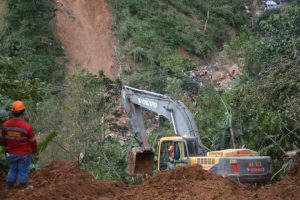 ITOGON, Benguet  –   What seemed to be an impossible access road to build in a single day was made a reality by personnel of the Philex Mining Corporation that made the mobility of rescuers and residents living in the vicinity of the landslide site at level 070, Ucab much easier compared to the early days of the search and rescue operations for the buried pocket miners and the members of their families at the height of the onslaught of Tropical Cyclone Ompong.

Philex president and chief executive officer Engr. Eulalio Austin, who visited the landslide site during the early days of the tragedy, recommended to authorities in charge of the operations the need to build an access road leading to ground zero to allow the entry of several units of heavy equipment needed by the rescuers and facilitate search and rescue operations but his initial suggestion was set aside because the proposal to build an access road in the area was not reportedly feasible.

“We assessed the situation and we saw how difficult the search and rescue operation was if they were limited to the use of the steep trail leading to ground zero that is why we really pushed for our proposal to build an access road from the existing road level up to the landslide site which is about five hundred meters below the main road,” Austin stressed.

The Philex official even went to the extent of convincing Mayor Victorio Palangdan to help him convince the surface owners of the property not to protest the building of the access road so that search and rescue operations will be much easier with the use of limited people to do the work as part of the clearing will be done by available units of equipment.

Mayor Palangdan interposed no objection to the proposal of the Philex president considering that the property to be traversed by the proposed access road is still owned by Benguet Corporation which will surely not object to the idea.

At around 11 am of September 19, Austin deployed one of Philex’s backhoe and a 20-man search and rescue team composed of 19 veteran miners and an engineer to start the job of building the access road from the level of the existing road in Ucab to the landslide site and in less than a day or at around 10 am the following day, the backhoe of Philex was already participating in the clearing of the mudslide.

The newly built road dubbed by residents and volunteers as ‘Philex rescue road’ was over 700 meters long, at least 3 meters wide and with a slope of 30 to 40 degrees which is just enough to allow units of heavy equipment to pass through and make search, rescue and retrieval operations much easier to the already exhausted volunteers composed of policemen, military, responders, pocket miners, large-scale miners among other concerned citizens.

Prior to the building of the ‘Philex rescue road,’ rescuers had to hike a 500-meter steep descending trail from the main road to ground zero and vice versa which was too taxing.

Because of the newly built access road to the landslide several units of heavy equipment from Philex, a number of contractors and from the concerned local governments are already able to reach ground zero with ease to help in the continuous clearing, search and retrieval operations for the remaining missing pocket miners who were buried alive by the huge landslide which was triggered by the onslaught of the recent weather disturbance that struck Northern Luzon.

BC administration department head Atty. Froilan Lawilao expressed the company’s support to the building of the access road even if it was named as ‘Philex rescue road’ because it was due to the exigency of the situation and it was seen by experts as the ultimate remedy to make the on-going operations much easier for the volunteers and the family members and relatives of the victims.

“BC did not object to the construction of the road because it was the most feasible proposal to make the on-going operations much easier and less taxing to everyone,” Lawilao stressed.

Aside from the rescuers and volunteers, it has been observed that residents living within the vicinity of the accident site are also using the new access road to reach their residences amidst the on-going call from concerned government agencies and local government units for a pre-emptive evacuation in the area because it remains a danger zone as per studies conducted by the Cordillera office of the Mines and Geosciences Bureau (MGB-CAR).

Austin disclosed that members of the Philex rescue team start their work every 6:30 in the morning while awaiting other rescuers and volunteers to arrive.

He claimed that his seasoned rescue team already established their camp in the area to be able to work as early as possible.

Palangdan expressed the gratitude of the people and officialdom of Itogon to Philex Mining Corporation for sharing their expertise and resources in making the search and retrieval operations much easier compared to what had been done from the first day, saying that the company could be relied upon in difficult situations like what had happened in level 070.

As of press time, some 60 casualties from the landslide were recovered by rescuers while dozens more are reported missing which are now the subject of continuing retrieval operations.

By Dexter A. See

Herald Express is a news organization based in Baguio City that has a weekly publication and an online news portal. The newspaper is circulated in the different provinces of Northern Luzon. The name of the fastest-growing publication in town is coined from the word ‘quick messenger’ which is self-explanatory. Our motto ‘we deliver the balanced news that matters to you’ was conceptualized to make it clear to our readers what to expect from our new writers and columnists.

LA TRINIDAD, Benguet – The municipal government recently lined up some twenty-four events for the conduct of the in-person Strawberry...