No Result
View All Result
Home Tourism, travel and Events

TUBA, Benguet – Empty cans of sardines andbottles of soda, a half-eaten bar of imported chocolate still in its packet, a rubber slipper with one of its straps severed,a discarded leather shoe, used baby diapers, dried leaves and barks, a piece of broken plastic pipe. 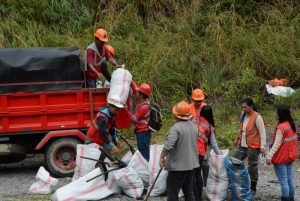 These were some of the pieces of rubbish collected by about 100 employees and other workers of Padcal mine, the gold-and-copper operations of Philex Mining Corp. in this province, when they cleaned up the Sal-angan River, in Itogon town’s Brgy. Ampucao,last Saturday.

The manager of Padcal mine’s Environment, Quality Monitoring and Evaluation Dept. (EQMED), Julius Bayogan, said the recent cleanup drive was in line with the “Bayan Ko Linis Ko” program spearheaded by the administration of President Rodrigo Duterte. He led employees from the different departments of Padcal mine, as well as members of its security force, to rid the two-kilometer river where Padcal gets its water for mill operation of the various pieces of refuse.

“While environmental protection and conservation is inherent in our corporate culture here at Philex Mining, this day is special as we are cleaning up the Sal-angan River in accordance with the environmental program of President Duterte,” Bayogan stressed, addressing the employees and workers before they all embarked on a four-hour cleanup drive.

Stressing that “Bayan Ko Linis Ko” promotes cleanliness in coastal and inland waterways, creeks, public places, and private establishments nationwide, Bayogan told the cleanup participants, who had all volunteered for the task, to later on segregate the pieces of trash they were about to collect into three categories. Papers and dried leaves would be considered biodegradable, for instance, while empty bottles would go into the sacks labeled “recyclable,” and broken plastic pipes and buckets should be regarded as “residual” wastes.

After dividing themselves into three groups—to be assigned in the river’s upstream, downstream, and the middle sections—and braving the drizzles and warding off mosquitoes and other insects, the volunteers, wearing PPE or personal protective equipment like hard hats, rubber boots, and reflectorized vests, collected 14 sacks of refuse weighing a total of 465 kilograms. The residual wastes weighed 382.5 kg. while the biodegradables, or rubbish that can be destroyed by natural processes, reached 45 kg., and the recyclables, which may be made and used into something new, amounted to 37.5 kg. Residual wastes, Bayogan explained, include what remains of agricultural, industrial, and mining materials after a treatment process, as well as household garbage that cannot be re-used or recycled.

“The cleaning up of our waterways also has been part of our routine with regard to our programs on environmental protection and sustainable development,” said Bayogan, who revealed that Padcal mine will next clean up the Balog Creek, in Brgy. Ampucao’s Sitio Balog. The 2.5-km. creek, which converges with the Agno River,and the Sal-angan River are both tributaries of Agno. Traversing the provinces of Benguet and Pangasinan, the Agno River is the Philippines’ third-largest river system with a drainage area of 5,952 square km.

Adhering to its principle of responsible mining, Philex Mining has maintained multi-sectoral teams that regularly monitor whether it adheres to environmental standards in air and water quality, solid waste management, reforestation, and mine rehabilitation, which are covered by Padcal’s Annual Environmental Protection and Enhancement Program (AEPEP).Last year, Philex Mining spent P269 million for its AEPEP, which deserves a 3- to 5-percent share of the company’s direct mine and milling costs that amounted to over P6 billion. This year’s environment-related expenses have been estimated to reach P493 million.

Bayogan, who supervised the segregation of the collected wastes from the whole stretch of Sal-angan River, said his team would continue coordinating with Padcal’s different departments in the cleanup activities around the mine site. He stressed, “We’re all in this together. This is and must continue to be in our corporate DNA.”

The City Tourism Operations Office underscored that the surge in tourist arrivals in the city last year, especially during the...

DAGUPAN CITY – The provincial government of Pangasinan will spearhead the commemoration of the Lingayen Gulf landings and Pangasinan Veterans...