TUBA, Benguet – Philex Mining Corp. and its sister-company, Maynilad Water Services, Inc., have given recognition to a team of miners and safety personnel from Padcal mine that successfully retrieved the bodies of construction workers who had died in a cofferdam in Quezon province when a flash flood swamped their worksite. 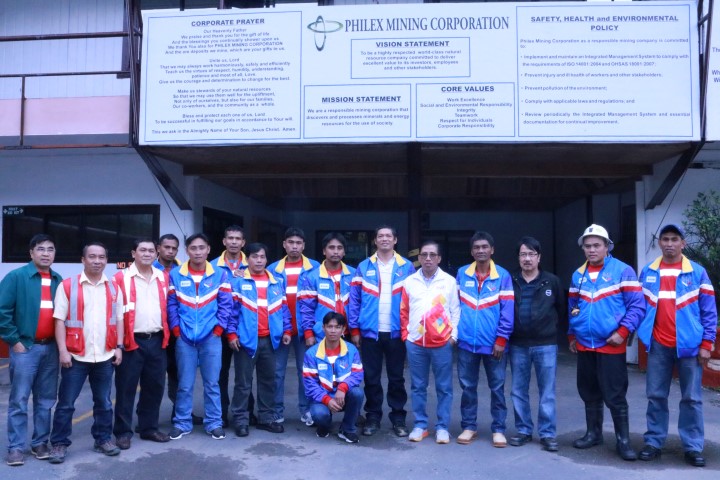 Field Operations Division to focus on better performance in 2023

“We commend you for your bravery in risking your lives during the rescue operations,” Eulalio Austin, Jr., CEO and president of Philex Mining, told Tuesday the nine-member team during simple ceremonies at the admin grounds of Padcal mine, in Brgy. Camp 3, Tuba. “You have proved once more your resilience as miners.”

All members of the award-winning Philex Rescue Team (PRT), led by Roosevelt Rosalin, manager of Padcal’s Safety/Loss Control Dept., received for their voluntary and heroic work certificates of recognition from Maynilad, a water-services provider to Metro Manila’s West Zone and some parts of Cavite, which also gave them a cash token of P70,000. Another cash token of P100,000 was given by Philex Mining.

The rescuers arrived back in Padcal on Aug. 27 after a two-week stint doing search-and-rescue and, later, retrieval operations in the town of General Nakar, where the Metropolitan Waterworks and Sewerage System (MWSS) was building the 13-kilometer Sumag River Diversion Tunnel along with other infrastructure projects.

Abel Wandagan, Sr., assistant team leader and underground safety supervisor at the Safety/Loss Control Dept., said it was such an emotional and dangerous operation for him and his companions, considering that they were friends with some of the victims, and that the tunnel was still filled with water almost to capacity, giving them very little room for maneuver.

He revealed that two of the six workers who died had worked as miners at Padcal mine, which Philex Mining has been operating since 1958, thus they knew each other. Another dead worker grew up in Padcal mine camp, where his mother used to teach at the Saint Louis High School – Philex, in Brgy. Ampucao, Itogon.

He identified the four bodies as those of Ferdie Sanadan, Roland Sanchez, Zenith Sicat, and Danny Harnois. Sanadan and Harnois were formerly Philex miners, while Sanchez hailed from Padcal.

Media reports, meanwhile, said Aug. 28 that the pilot Miguel Logronio and the aircraft mechanic Jay Gregorio died when their helicopter crashed Aug. 23 in the mountainous part of Quezon province, owing to bad weather, as they were on their way to fetch the PRT from Sitio Sumag.

The 600-meter Sumag River Diversion Tunnel would connect the Sumag River to the Umiray-Angat Transbasin Tunnel, in Bulacan, which leads to the Angat Dam, a concrete reservoir embankment that supplies water to the Manila metropolitan area.

The cofferdam, which was built inside the diversion tunnel to give construction workers room to work without interference of water, had collapsed Aug. 13 after it was swamped by a deluge of water brought about by monsoon rains.

Rosalin said three of the nine workers had managed to escape as they were near the tunnel exit during the flash flood. He added that two of the dead workers—Simeon Sig-od and David Guiagui, Jr.—were retrieved separately on Aug. 14 and 15 by some workers of the MWSS contractor, Cavite Ideal International Construction and Development Corp.

Austin said Philex Mining had volunteered the team, which coordinated with the military in carrying out the operations at the tunnel of MWSS, a government-owned corporation in charge of water privatization in Metro Manila.

Equipped with excellent skills in the search-rescue-retrieval operations—as a miner’s work involves the recovery of ore from under the ground—PRT has always helped the country’s beleaguered communities in times of disaster, earning at least 20 awards and citations from various award-giving bodies and offices since 2009.

Field Operations Division to focus on better performance in 2023

ARINGAY, La Union – The Field Operations Division (FOD) of the DA-RFO CAR has set its goals of performing better...