Filipino fighter Roy Doliguez sees his upcoming three-round encounter with Alex Silva as an opportunity to bring back the glimmer of his professional mixed martial arts (MMA) career.

Both highly-decorated combatants are set to collide on the undercard of ONE: Throne Of Tigers, which takes place at the 10,000-seater Stadium Negara in Kuala Lumpur, Malaysia on February 10, 2017.

Doliguez was once considered as one of the brightest strawweight MMA competitors in the Asian region, but his billing lost its luster due to a string of setbacks.

When Doliguez made his ONE Championship debut against Dejdamrong Sor Amnuaysirichoke for the inaugural ONE Strawweight World Championship belt in May, 2015, he yielded to the highly-touted Thai combatant via fifth-round technical decision.

Doliguez tried to bounce back from his loss to Sor Amnuaysirichoke by squaring off with Riku Shibuya in January, 2016, but he dropped a three-round unanimous decision to the Japanese stalwart.

Coming off a year-long hiatus, Doliguez is eager to put himself back on the winning track as he set to have his cage return.

“I haven’t won a bout in ONE Championship. This is my chance to get that win. If I want to fight for the title again, I have to win first. I am determined to win this fight,” he said.

Prior to his two-fight losing slide, Doliguez was riding high on a four-bout winning streak, beating the who’s who of the local MMA scene in the Philippines.

Doliguez seeks to reinsert his name into winner’s column, but the man standing in his way is Silva.

Known by the moniker “Little Rock,” Silva holds a 4-1 win-loss slate and has won three-straight submission matches in ONE Championship.

The 34-year-old native of Sao Paulo, Brazil is a Brazilian jiu-jitsu specialist with a terrifying ground game and a knack for securing highlight-reel submission finishes.

Doliguez admitted that he is fully aware of his opponent’s elite submission arsenal, but he stressed that he is not intimidated by it.

“I know he has a good submission game, but I am not afraid of it. I don’t mind exchanging positions with him on the ground. I also have grappling aside from my striking. I don’t worry that much against him,” he stated.

However, Doliguez clarified that he is not belittling Silva’s grappling pedigree, asserting that he has to be careful in entering his Brazilian foe’s submission wheelhouse.

“But still, I have to be careful. He is a fighter with a world-class Brazilian Jiu-Jitsu background. That’s why I am working on my takedown defense for this fight,” he disclosed.

A former professional boxer who has nearly 50 fights under his belt, Doliguez issued a stern warning to Silva if he plans to exchange strikes with him.

“Grappling might be his bread-and-butter, but striking is my arena. If he wants to strike with me, I have no problem with that. For sure, he will feel my power,” Doliguez cautioned.

Although there is a tough task in front of him, Doliguez stressed that his eagerness to win keeps himself confident that he will have his hand raised.

“He is only a fighter, and everyone is beatable. I always put that in my mind. That’s why I’m confident and focused. I know on February 10 that I will prevail over Alex Silva,” he ended.

Silva has the opportunity to cement his status as the next contender for the ONE Strawweight World Championship if he will play his cards right against Doliguez. 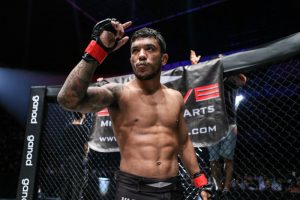 Silva believes that a convincing victory over Doliguez will put him closer to a date with current titleholder Yoshitaka Naito as his opponent once vied for the ONE Strawweight World Championship.

“It’s really up to ONE Championship. But I already won three-straight fights. My opponent fought for the world title before. If I get an impressive win in this fight, there’s a big possibility that I will get a title shot in my next fight,” he stated.

Although he has his sights set on a heftier prize, Silva clarified that defeating Doliguez is his main priority.

According to the 34-year-old submission specialist, winning an MMA world title is what keeps him focused and motivated to continue the intensive work at the gym.

“My goal is to be champion. I know where I am right now and where I will be in the future. That’s why I am taking it one fight at a time and continuing the hard work in training. I will just be focusing on reaching my goal regardless whom I face inside the cage,” he said.

Widely recognized as one of the best strawweight combatants in ONE Championship today, Silva is riding high on a three-fight winning streak.

In addition, he is known to be a world-class Brazilian Jiu-Jitsu practitioner with a terrifying ground game and a knack for securing highlight-reel submission finishes. Four of his professional career wins came by way of submission.